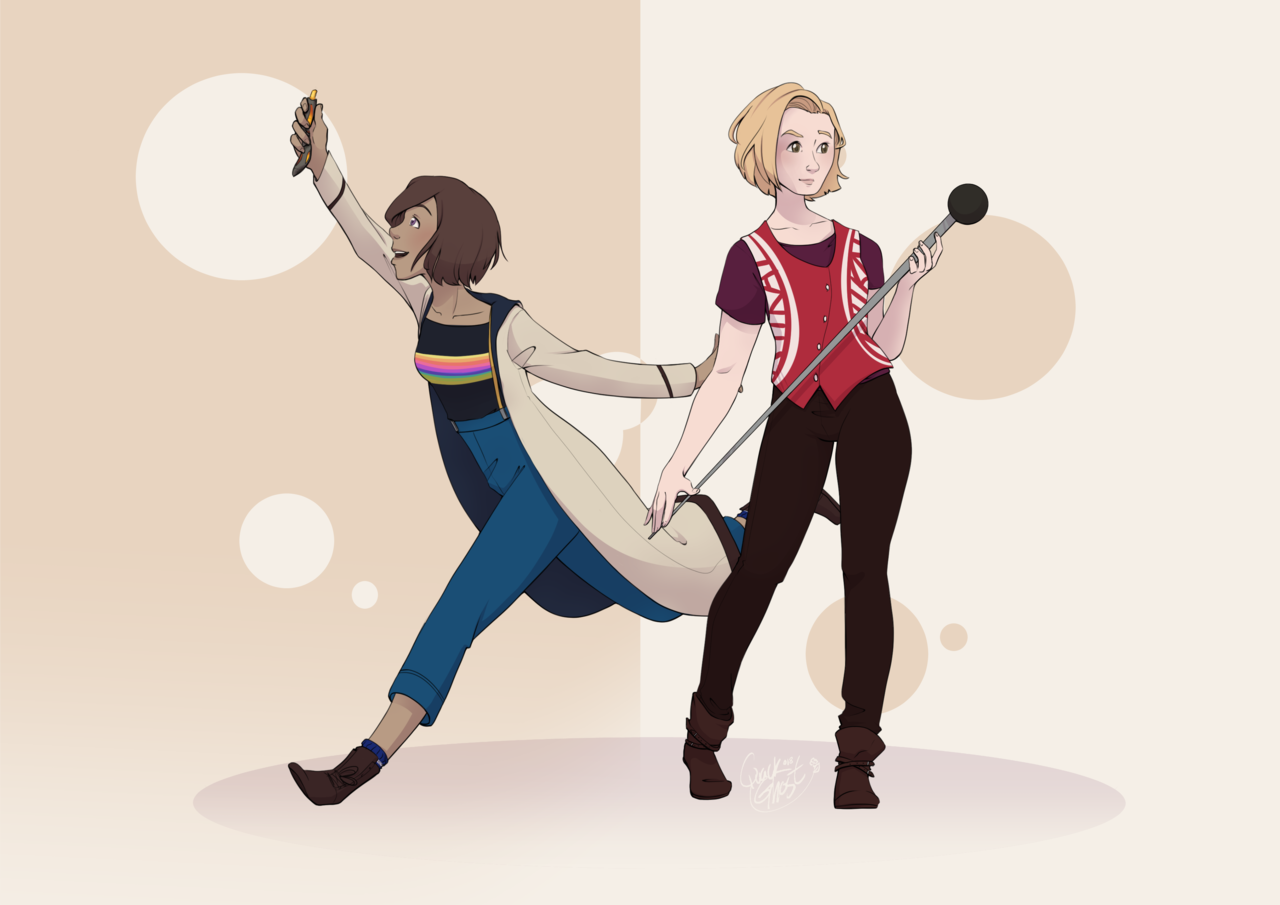 I recently pointed out how in certain ways my borrower OC Zepheera and the 13th Doctor are quite alike, in (relative) height, looks, and choice in wardrobe.

This was inevitable. The Doctor is fascinated as always. Zepheera’s certainly having fun.

Art by the lovely @ghostquack who did amazing work as always, bringing my silly shenanigans to life!

3. Theft – Accusations are made

Still catching up, and still loving series 11 so far! ^^

“I’ve done no such thing!” asserted the newly regenerated Doctor, putting her hands on her hops in an unintentional mimic of her inches-tall companion. She’d started off so excited to be able to see and interact with Zepheera at the borrower’s own scale, until accusations were flung.

With a flat look, Zepheera placed a hand flat on the top of her head and traced a straight line from it to the Doctor’s. Before, whenever Zepheera was ever the same size as previous incarnations of the Time Lord, he’d always ended up a bit taller than Zepheera. This time they were dead even.

Zepheera lowered her hand to pinch a short blonde lock between her fingers. The length and style of the Doctor’s new hair wasn’t too different from Zepheera’s other than in color.

The Doctor frowned but batted at Zepheera’s hand. “Coincidence!” she maintained. “Regeneration’s a lottery…”

“You can at least admit to the shirt and the boots, Doctor!” Zepheera gestured to the Doctor’s wardrobe, which she picked out herself and couldn’t possibly blame on the regeneration.

The Doctor opened her mouth to argue, then looked down at herself. Despite Zepheera’s t-shirt and boots being hand made by either herself or others her size and thus being much simpler in design, the Doctor couldn’t deny they were quite similar.

“Well you make it sound like stealing!” she protested, pouting when Zepheera rolled her violet eyes with a chuckle.

Asks and Prompts are open! | Submissions too! | Main Story

The entire bridge shook like it belonged in a
snow globe. Few people maintained their footing as something collided with the
ship and sent it plummeting toward the planet below. The Doctor was not one of
those people.

Sprawled across the trembling floor, he took a
split second to take stock. Though he’d landed hard, he hadn’t sustained any
notable physical injuries.

That wasn’t his main concern.

His four inch tall companion, who was perched
on his shoulder before the crash, had been thrown several feet away in the
impact. What was worse, the deepening angle of the falling ship created a slope
that dragged her woefully light body along the smooth floor.

“Zepheera!” Lunging forward, the
Doctor threw his hand out, stretching himself across the floor to close the
distance.

His hand curled protectively as Zepheera slid
into it. Immediately he felt her give him her miniscule weight, the fluttering
of her tiny hands searching for purchase.

The ship lurched again, sending more people
tumbling. The Doctor’s other hand cupped around the first, and right then the
metal of the ceiling groaned.

The Doctor folded himself over his hands to
shield Zepheera as the ceiling came crashing down.

Starting to catch up on these ^^

Asks and Prompts are open! | Submissions too! | Main Story

I know he’s done this to Rose and Donna ( with no success ), but has The Doctor ever tried lock Zepheera on the TARDIS to keep her out of a dangerous situation?

I wouldn’t rule it out, knowing the Doctor, but Zepheera tends to stick close to him most of the time. If he was determined, he might have to be a little more forceful than usual to get her to stay in the TARDIS without him. Those two can be quite stubborn with one another.

Edit: Given that she’s four and a half inches tall, the Doctor can be quite protective of Zepheera. It depends on the situation whether or not that protectiveness manifests as him keeping her close or keeping her shut away, safe in the TARDIS.

Anything that makes her seem foolish. She’s very smart, thinks quickly on her feet, and sometimes the best solution to a problem isn’t always the most graceful.

Though she does have a more playful side of her personality, she’s often embarrassed when it’s pointed out. Growing up, she was always told to act her age. Now her age is far from reflected in her appearance, and sometimes that youthful levity beams through. She’s quick to reign it in, however, and focus on what’s serious and immediate and practical.

Thanks anon for being patient with me! ( Edit: Apologies for this taking so long, I swear I thought I posted it! O: )

1. What is the maximum amount of time your character can sit still with nothing to do?

I give him three days, tops, and that’s generous. He’s a very action-oriented person, always needs to busy himself somehow. Poor Nathan would have a very anxious Stan bugging him for something to do, he’s fallen down too many YouTube rabbit holes and is going a little nuts.

4. How easy is it to earn their trust?

Stan’s optimistic and likes to hope for the best in people, but he’s also good at reading them. The second he senses ill intent in someone, it’ll take a lot of proof to win trust back.

11. How do they cope with confusion? (seek clarification, pretend they understand, etc.)

Stan is not ashamed to ask questions when he doesn’t understand something. Only if a situation were short on time would he skip the crash course and just roll with what he knows and sees.

12. How do they deal with an itch found in a place they can’t quite reach?

Begs Nate to scratch it or finds anything remotely resembling a backscratcher.

His own shortcomings, mostly. He’s highly critical of himself, but he keeps a lot of that inside. When he does make a mistake, he’ll go through self-flagellation before reverting to humor and eventually moving on with his life. Depends on the mistake.

Of course, Nathan can always find a way to make him turn bright red.

A. Why are you excited about this character?

Of the characters I’ve built over the years I’ve been writing, Stan is the only one that has taken me completely by surprise. I didn’t plan him as more than a passing character, yet he emerged. I continue to learn about him as I go, whereas with my other characters I carefully plan out their backstories beforehand. It’s an interesting experience, to be sure, and I can’t wait to see where he takes me.

Thanks again to @nightmares06 for asking and waiting patiently for my answer!

16. What makes their stomach turn?

Wanton violence, especially against people who can’t fight back.

One of the harder lessons one learns on the TARDIS is the many ways people can be cruel. While anyone they encounter doing awful things for their own gain puts a sour taste in Zepheera’s mouth. She cannot tolerate people destroying things and people in their path, much less abuse toward borrowers or others smaller than average and children of any size.

23. How does envy manifest itself? (they take what they want, they become resentful, etc.)

It isn’t often that Zepheera is truly envious of someone. When she is, I don’t see her acting on it. If the thing she envies can be earned in some way, she’d take great strides to achieve what she wants. She’d never take it from someone.

34. How hard is it for them to shake off a sense of guilt?

Depends. Did she lie to her friend in order to spare his feelings? Then she can shake off the guilt fairly easily.

Feeling responsible for the death of her little brother? Impossible to shake.

Thanks again @neonthebright for being patient while I answered these!

“Look, I don’t see any other option–” the Doctor cut himself short when he caught sight of Bowman approaching. He waved him over with a huge grin. “Ah, Bowman! Perfect timing! I need to ask you for a favor.”

“No, you don’t!” Zepheera emphasized.

“Yes, I do!” the Doctor shot back, keeping his upbeat smile where it was.

Based on the prompts Glance from this list of 100 one-word prompts, and Dollhouse from this similar list of G/t themed prompts from @nightmares06 and @bee-wrecker respectively. Finally getting around to these!

It had been going so well for Zepheera.

There were only two humans in the small flat, one of them a child. For six months, Zepheera had been living comfortably in their walls, and for nearly seventy years of fighting to survive, she trusted herself to keep hidden and make this home last for once.

And all it had taken was a glance from the child to ruin it all.

Desperate for any kind of barrier between herself and the human, she ducked into the child’s dollhouse. Any human was bad news for a borrower like Zepheera, but children were frightfully unpredictable and prone to grabbing and playing. At 68 years old, even with the body of a young adult, Zepheera was not in the mood for any of that nonsense.

The ground trembled beneath Zepheera as the child approached. Even a little girl, nine years old and much smaller than any adult human, greatly outsized the four and a half inch tall woman cornered in the dollhouse. As the child drew closer, Zepheera could clearly hear each and every breath rushing in and out of lungs larger than the room the borrower had made her prison.

The little girl’s voice was mercifully light, a quiet rumble that washed over Zepheera through the plastic wall her back was pressed against. A wide blue eye peered in through one window, causing the borrower to jump and dart into the next room. Her eyes flashed frantically around for an exit, regretting her choice of hiding place, especially as the girl shifted outside.

With a loud click and a rush of air, half the dollhouse swung open. Zepheera was left exposed, blinking through the sudden light up at a gigantic child.

The human’s head tilted, brow pinched as she sat back on her heels. “Did I scare ya?” she inquired.

Zepheera frowned, realizing that it wasn’t curiosity that made the girl pursue her anymore, but concern. Those blue eyes, each the size of Zepheera’s head, were filled with it.

Bemused, Zepheera shook her head no.

The blonde girl’s shoulders slumped in relief. “Good. Why’dja run away, then, if you weren’t scared? How come you’re so small? What’s your name? I’m Rose!”

Zepheera’s brow lifted at the bombardment of curious questions. Maybe, if she played her cards right, she wouldn’t have to move out just yet.

“I ran because I was nervous,” said Zepheera, peeling herself from the wall sheepishly. “It’s my first day, you see, being an imaginary friend. I’m Zepheera.”

“Watch out!” warned Zepheera, whose attention was toward the opposite direction. The Doctor had just enough time to notice the green blur shooting towards him and dodge smoothly out of its way, quickly reaching out with both hands to stop it before it could get too far.